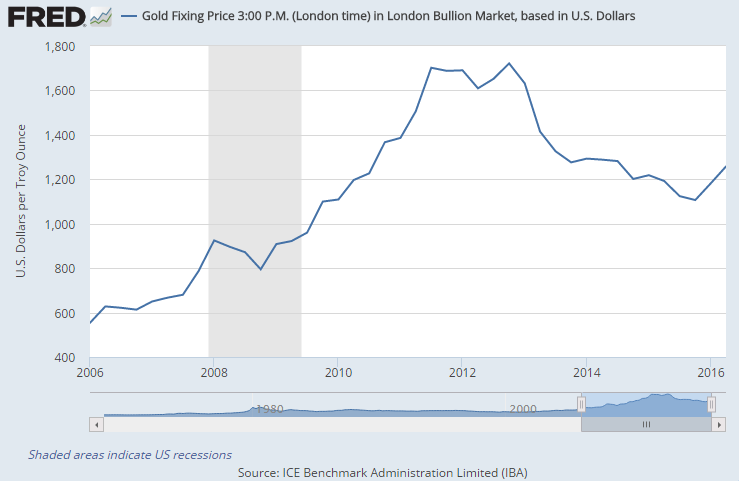 Accounting for head office and exploration expenses as well as direct charges meantime, specialist consultancy Metals Focus said this week that the average “all-in sustaining cost” of mining 1 ounce of gold rose 6% worldwide in the second quarter of 2016 from the previous 3 months – the first increase since spring 2014.
The cost increase just lagged the rise in market prices however, raising AISC profit margins by 7% to an average $379 per ounce.
“Currency movements proved the main driver,” says Metals Focus‘ analysis, extending the pattern of recent years but this time pushing US Dollar mining costs higher as major gold-producer currencies such as the Australian Dollar, Canadian Dollar, Russian Ruble and South African Rand rose on the FX market.
Taking advantage of Q2’s improved profit margings, new hedging of unmined gold added 21 tonnes to the outstanding total already protected against price falls, says GFMS, taking the global hedge book to a 6-year high of 295 tonnes by end-June.
Swelling by two-thirds from total  gold miner hedging in mid-2015 however, that totals less than 10% of the record hedge book built by the global gold-mining industry as prices fell during the long bear market ending in 2001.
“The gold producer community,” says GFMS, “is starting to develop a more open attitude towards hedging” after the shareholder backlash and rapid de-hedging amid gold’s 2001-2011 bull market.
But looking ahead to Q3, pre-booked deliveries to settle existing hedge contracts make “modest de-hedging the more likely outcome” unless gold prices rise to new 3-year highs above $1400 per ounce.
For mining costs, “We are of the view that Q1 2016 marked the bottom of the deflation cycle,” says Metals Focus.
“Global gold production costs will continue to rise over the coming quarters as gold prices improve and margins recover.”
The outstanding global gold miner hedge book has not expanded for 3 consecutive quarters since the turn of the millennium on GFMS’ data.

See all articles by goldbug.

Please Note: All articles published here are to inform your thinking, not lead it. Only you can decide the best place for your money, and any decision you make will put your money at risk. Information or data included here may have already been overtaken by events – and must be verified elsewhere – should you choose to act on it. Please review our Terms & Conditions for accessing Gold News, RSS links are shown there.